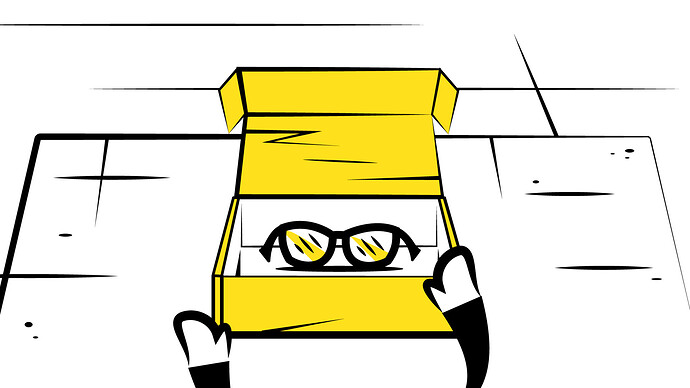 The device known as the Nerd Lens is what every Nerdosian must wear in order to go about their business due to the current state of the world’s ecosystem that has affected all surroundings, regardless if it’s interior or exterior.


Because of the Great Cloud Disaster, which was the direct result of an unauthorized experiment performed by Mad Scientist, remnants of the cloud covering that infected everything its been able to access still lingers. It is unknown how long this unfortunate phenomenon will last, but one thing that is known as it has somehow stripped the organic view of all colours everywhere.


Without the Nerd Lens, the entire world of Nerdosia is black and white, along with some grey. There is no yellow hues to be found anywhere, which is essential to ignite other colours to come forth.


To the naked eye, the Nerd Lens doesn’t appear to be anything more than a thick, regular pair of sunglasses. However, what a difference it makes when those are put on!


Without them, the world is a dull black, grey, and white that feels every bit as lifeless as it looks. Put the Nerd Lens on and now the world becomes one of colour and seemingly comes to life.


When the quote “Living Like a True Nerdosian” is promoted with the Nerd Lens, it means exactly this!


Prior to the Great Cloud Disaster, the nerds of Nerdosia lived as normally as possible, aside from the fact the majority lived underground. Much like the Great Disaster, some worldwide cataclysm resulted in the entire population of nerds to seek underground shelter well over a thousand years ago. Nobody knows the exact details what happened, but it literally took a thousand years before nerds could safely return to the surface.


Even then, over a thousand years ago, because the underground lacked exposure of the sun and it was dark, nerds developed an ancient form of Nerd Lens that used a variety of above ground and below ground elements to make it easier for nerds to move around within such an environment.

When nerds began to live underground the first time around, they learned how to adapt to such an environment and make all that work for them. A thousand years’ worth of development resulted in the evolving of an entire population of nerds who found alternative ways to live their lives as best as they can.


Like all worlds, not every nerd agreed with each other and it didn’t take long before a mutual agreement was made there are four distinct groups of nerds that needed to develop their own community and move on. Those communities are what we know now as Physical District, Retro District, Virtual District, and the Common Core (Common Area). This proved to be the best move the nerds could have made as this allowed better diversity from district to district, as well as each district’s revolutionary approach to at least improve their own corner of the world.


As they did this, each district came up with their own verson of special lens devices so they could travel into newly tunneled areas. Among the districts, the Virtual District excelled at combining augmented reality, digital reality, physical reality, an virtual reality in a manner that eventually resulted in the development of the global travelling system known as The Pipe.

When the Great Cloud Disaster occurred when it did, while all nerds on the planet experienced extreme damage to their visual cortex. Not only did this disaster render each nerd color blind, but it also severely impaired their ability to see anything beyond a blur. Also at the timing of the blinding cloud cover, a species of animals known as nerd bats had the exact opposite reaction to what was happening to the nerds. Each bat went from being virtually blind to having perfect vision.


At first, the nerds were in a state of panic. Not only could they no longer see, but now heard and felt these nerd bats. Only a select few clued in what was really happening and were quick enough to find an answer to solve the population’s new problem.


Alyx and Enaid from the Physical District took nerd bats, both dead and alive, and hopped on The Pipe to personally meet the Great Nerd, Kayoto, with their discovery at his University.


Bernie, the mayor of the Retro District and Galileo, mayor of the Virtual District were both notified by Kayoto to use The Pipe and get to Nerdosia Idea’s Think Tank immediately. Neither hesitated to join in on what they knew was something big.


Other key invites also were extended to Gill of GG Academy, Makart of Command Centre, Naro of the Plant, and Siris who was at the gates of the Mine at the time. As a think tank, they all compared stories, discoveries, and suggestions.

Similar to a virtual reality headset, the Nerd Lens is a pair of glasses that has been specially formulated to serve as the official eyes of every nerd on Nerdosia. This way, they can live as close to a true Nerdosian as possible. Due to the Great Cloud Disaster, the ability to clearly see much of anything is not there. What nerds can no longer do for themselves at this time, which is see, is now done for them through the Nerd Lens. Without it, they’re walking blind.


The Nerd Lens uses DNA samples from nerd bats who somehow went from being blind to having clear vision. However, after failed attempts to use the DNA of nerd bads into the bloodstream of a nerd, the decision to develop the Nerd Lens has been the current solution to deal with this issue for the time being.


The Nerd Lens allows a nerd to see color. Without it, the environment is nothing but a blur mix of white, black, and grey.