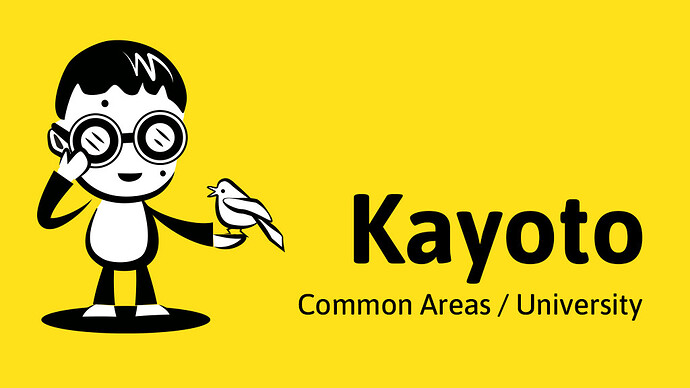 Before becoming the oldest living nerd of Nerdosia, a much younger Kayoto used to spend a great deal of time with a nerd who often popped in and out of his life until one day that nerd stopped coming around anymore. He never did find out what happened to that nerd, but suspects there was more to that nerd than met the eye.


That mysterious nerd said many things to Kayoto that would sculpt how he’d live his life. For as long as Kayoto can remember, he has documented everything he learns about or comes across personally. However, if it’s something he’s learned or personally seen, instead of getting caught up in the moment, he would cross-reference first to make sure his mind and eyes are not playing tricks on him. He learned this lesson, thanks to that mysterious friend who told him to never trust anything other than his gut. If it doesn’t feel right in the gut, it’s likely a lie.


Thankfully for Kayoto, he also has a photographic memory. While there may be no need to record everything he comes across, he does it anyway. He picked this hobby up when he was introduced to chronicles that are as ancient as the underground structure he spent his entire life in. Chronicles fascinate Kyoto, both reading them and creating them.

Kayoto makes a point to get to know as many nerds as he can, but not get too close. Losing that mysterious nerd friend of his when he was much younger left a bad taste in his mouth and he personally vowed never again would he get too close to anybody.


The only other time he started to get close to anybody was a friend whom he thought he could relate to that went by the name of Mads Sedesin. When Kayoto’s mysterious nerd disappeared without a trace, this Mads befriended him and the two began to hang out together. At first, Kayoto really liked the nerd, but later discovered how mean he really is. As soon as he learned this, he made a point to spend less time with him.


But, one thing Kayoto learned at a young age is keep potential enemies close enough so you can keep an eye on them. With Mads, what Kayoto did was call him Mad Scientist, which was an accurate description of the nerd, but at the same time to tease him in a manner where it would boost his ego instead of bruise it. The only nerd who knows the real name of Mad Scientist is Kayoto. The name Mads somehow got dropped along the way.


Currently, Kayoto is also referred to as the Great Nerd for two main reasons. The first is due to him being the oldest living nerd on Nerdosia. Everybody before him either vanished without a trace or perished. When asked questions about it, all Kayoto tells the nerds is to read the chronicles.


The second reason is because he is Nerdosia’s walking, talking nerdipedia. Whenever a nerd has questions about anything, Kayoto is the one to approach. Each time a nerd approaches him to ask a question, he will make a scrapbook out of it.


What Kayoto has been known to do on occasion is write gaming novels and create sculptures, which he then challenges his students at University to play. He will even get in on the gaming as a means to socialize.

With all the elders gone, only Kayoto is left from what nerds simply call Ancient Nerdosians. Although he’s not really an ancient, he knows more about them than anyone else. And, the last generaton of ancients as he’s calls it, were his mentors before they mysteriously disappeared.


As tradition has it on Nerdosia, the oldest living nerd automatically becomes Chancellor, who is to be answered to by the mayors of districts and top-ranking members of the Nerdosia Security Network. However, because Kayoto doesn’t entirely trust the Nerdosia Security Network, he has created his own team where each nerd has been trained to do as Kayoto does. This means they observe and record anything and everything they come across, even if it seems insignificant.


Kayoto is only doing this because he knows this is something Mad Scientist will do somehow. He also knows his former colleague is a control freak. Up until the Great Cloud Disaster, Kayoto was able to keep an eye on him. Now with Mad Scientist in hiding, Kayoto needs to find a way to somehow stay one step ahead of that one nerd who has proven to the official nemesis of Nerdosia.

Since the Great Cloud Disaster, Kayoto has found himself in more demand by the nerds of Nerdosia than ever before. When chaos first hit after Mad Scientist’s crazy experiement, the population panicked. Kayoto worked around the clock with teams from Physical District, Retro District, and Virtual District in Nerdosia Idea’s Think Tank to come up with the best solutions. In the end, the Nerd Lens became the best answer to help restore life on Nerdosia as close to normal as possible.


When learning about nerd bats being able to see, as well as nerd cats, this had Kayoto seem to disappear from everyone’s sight for a full month before first making his appearance to Galileo, mayor of Virtual District. Before the beginning of that month, Kayoto handed his three cats to his mayor and friend, whom he learned had a cat names Siris who picked up some unusual traits.


Kayoto’s cat, Ama, and her two kittens, Mac and Maz, behaved between each other that took him by surprise. In true Kayoto form, instead of getting caught up in the moment, he wanted to research further. He trusted Galileo enough to not just look after his own three nerd cats, but keep them.


Kayoto knows things in Nerdosia are going to get real interesting, so he believes leaving his nerd cats to Galileo is the best thing he can do for them.


While the rest of Nerdosia works on picking up the pieces and move forward with their lives, Kayoto has been busy with a series of investigations, documenting, and research. 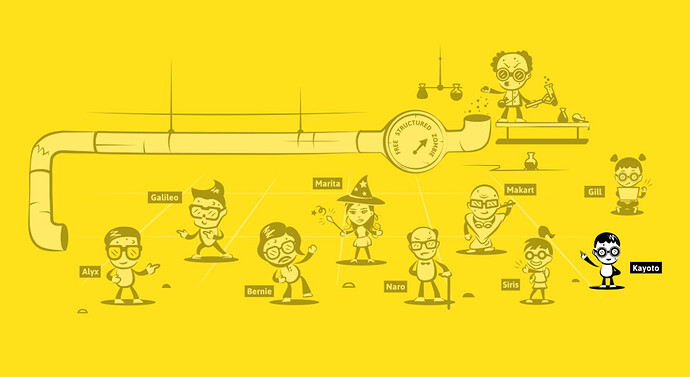