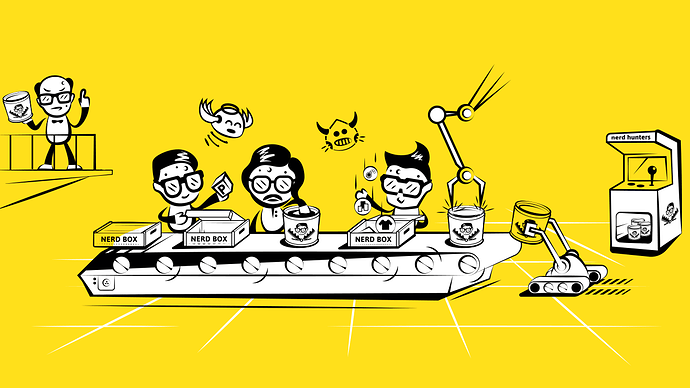 The Plant serves as the hub for all of Nerdosia. It produces a number of goods to make lives easier for members of the Retro District, Physical District, and Virtual District. While the Hydroponics Warehouse of The Mall handles food-related goods for Nerdosians, the Plant handles the rest.

Naro is the director of the Plant and oversees everything. He has left the Plant location only once and luck had it that day Gill of GG Academy came face to face with a flash fire that was triggered due to a malfunction at the Plant. From that day forward, Naro opted to never leave the Plant for long again.


Shortly after the Plant’s malfunction, he meets a white nerd bat he names Bart. Unlike any other bat of Nerdosia, this one is all white. Another special characteristic of this bat is he’s considerably more intelligent than the other bats. Does his color have anything to do with it? As far as Naro and Kayoto, whom he approached about it, the answer to that is no.

The Plant and Mine Connection

There is no other way in or out of the Mine than through the Plant. Throughout the entire underground layout of Nerdosia, the Plant is the most secure as its located directly below Mount Nederest. Even with the freak accident that caused the little fire at GG Academy, the Plant is as top-notch of a location as it gets.


Because of this, the entrance to the Mine can only be accessed through the Plant. According to Kayoto’ explanation, the Ancient Nerdosians sees the Mine as one of the most essential needs for all of underground Nerdosia because of all its resources.


At all times, Nerdosia Security Network is stationed at the entrance of the Mine. In addition, to ensure nerds do not abuse what the Mine has to offer, it’s also security measures so nothing from the Mine comes out to do any kind of damage to the Plant. While it’s not completely proven, the freak accident the Plant experienced is likely connected to a creature that emerged from the Mine. When brought up, the white nerd bat, Bart, comes to mind as Naro found it near death by the source of where the accident occurred. Sensitive equipment was hit with enough force to cause something to rattle that sparked a fire at GG Academy. Luckily nobody was hurt, but it’s something Naro doesn’t want to see happen again.

The Plant is also Naro’s home. He has done a series of modifications to the place so he never has to leave it. He and Bart stay there 24/7 unless there’s a need to meet at Nerdosia Idea.