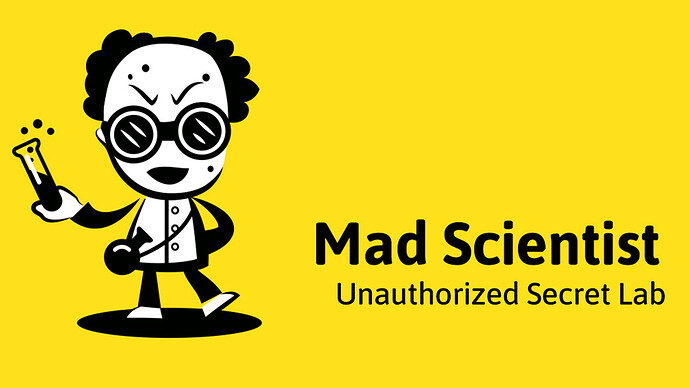 Very little is known about the mad scientist whom all of Nerdosia simply refers to as Mad Scientist. Only the Great Nerd Kayoto has been known to call him Mads Sedesin. It is known that Mad Scientist and Kayoto have lots of history between them, but the details revolving around that history are mostly unknown.


It is rumored Mad Scientist was born as a genius. Kayoto once made reference he was a child prodigy of an ancestor who used to lead Nerdosia before a disaster came about that caused one giant community of nerds into three distinct districts. How much truth there is to the rumor remains unknown, but there is evidence an older civilization that once lived on the planetary surface before building an entire community deep underground in order to escape some kind of world-ending event.


Even when the nerds found it was save to return to the surface again, it was rumoured Mad Scientist preferred to live underground. At least this is the story Kayoto tells people when they ask questions about him. Kayoto did admit Mad Scientist used to work for him, but found relating to him was difficult as Mad Scientist always kept to himself.


It is rumoured Mad Scientist loved his comic collection that featured stories where one culture would clash against another due to political and/or religious differences. He also enjoyed strategic style games where a winner cannot be declared until the losing side has no moves left to go. One game Kayoto claims Mad Scientist was very good at was Nerdopoly. He also mentioned, however, he was also a sore loser.

Mad Scientist keeps to himself. He’s even openly admitted to Kayoto he prefers being alone than hanging out with any of the nerds. Kayoto concludes it has much to do with the inclusive lifestyle those who raised Mad Scientist did to him. Ever since as a baby nerd, his guardians kept him from having much of social life.


Kayoto did hint the nerds who raised Mad Scientist often mixed chemicals together and applied them to animals, plants, objects, and other nerds. This is something Mad Scientist definitely likes to do as he enjoys manipulating everything he can get his hands on. However, if he can’t control it, he will find a way to destroy it.


He is like this with other nerds, too. The art of brainwashing and manipulation to convince nerds to do whatever he wants them to do is something Mad Scientist is good at. It’s not hard for him to get two best friends to argue with each other. As sick as it sounds, Mad Scientist considers this as a hobby as he treats nerds as if they are chess pieces on a board.

Mad Scientist, when he worked for Kayoto at University, was the assistant chief engineering scientist that was overlooking the final batch of upgrades for the planetary travelling device known as The Pipe. He answered only to Kayoto, but also kept much from him as well.


While Mad Scientist was brilliant at manipulating digital technology with virtual and augmented technologies, he was terrible in social situations. Kayoto learned the hard way expecting Mad Scientist to provide a sound argument in anything is a bad idea as he is too arrogant and too impatient.


Kayoto assigned Mad Scientist to focus strictly on engineering with a variety of different chemicals and minerals to improve The Pipe’s overall performance to help ease some of the nerds of Nerdosia’s concerns about whether or not it really is safe travel. What Kayoto didn’t realize at the time was how much Mad Scientist resented nerds who couldn’t bring themselves to trust The Pipe enough to travel it.


Mad Scientist also resented nerds who took The Pipe for granted. All while working for Kayoto, Mad Scientist had been looking for a way to manipulate The Pipe to have the nerds stop thinking so much and just do as they’re told.


On one fateful day, unknown to Kayoto until it was too late, Mad Scientist found what he thought was the perfect formula to do to The Pipe what would please Kayoto while at the same time sneak in his agenda without anybody knowing.


Ignoring explicit instructions by Kayoto to not do anything to The Pipe without his direct approval, Mad Scientist did what he wanted anyway. He conducted his experiment straight into The Pipe’s mainframe by manipulating radio frequencies with Kayoto’s liquid nanobytes that originally designed The Pipe. He did this without testing on something safer, which proved to be disastrous as it caused a great explosion that would change how every Nerdosian would live from that moment forward.

There was no time to react as it happened so fast. The moment Mad Scientist entered the final digit of his code to activate the pool of liquid nanobytes he had installed into The Pipe’s mainframe, a massive explosion went off. The force was strong enough to throw Mad Scientist across the lab and knock him out.


Unknown to Mad Scientist, that first explosion acted like a chain reaction throughout the entire structure of The Pipe. A series of explosions kept going off, along with very thick clouds of grey. Those travelling within The Pipe as this happened were not just the first affected, but took the worst damage with the most severe headaches and completely losing their eyesight.


Among the population on the surface of Nerdosia when the disaster happened not only met with the thick dark clouds, but some strange white powder to go with it. Most of the nerds experienced strong headaches also experienced strong headaches, but not as severe. As for nerds who were either indoors or underground (mostly underground), their headaches were not quite as bad, but uncomfortable enough. And they, like the other nerds, also lost most of their eyesight.


It took a long time for the cloud to finally settle, but to this day, it still hasn’t settled completely. Just as Nerdosians were returning to life back on the surface, the stunt Mad Scientist pulled forced them back underground again.


Knowing Kayoto and the rest of the nerds would come after him, Mad Scientist fled University as soon as he regained consciousness, but not without stealing some remnants of the liquid nanobyte tubes that managed to avoid destruction when the big explosion went off.

In a secret lab at a location nobody knows about, not even Kayoto, Mad Scientist now works on his own. With vials of liquid nanobytes stolen from Kayoto, plus more that he was able to steal from GG Academy, he conducted additional experiments.


One such experiment resulted in the mixing of two different vials where at first nothing happened. Mad Scientist attempts the same experiement a second time, thinking he missed something. But, as fate would have it, a slight rumble caused some stone dust particles from the ceiling of his secret lab to fall into the cauldron that resulted in an explosion.


While this explosion wasn’t quite as powerful as what swept through The Pipe and all of Nerdosia, it was still powerful enough that caused Mad Scientist to fall back. When he got back to his feet again, he noticed the liquid inside the cauldron changed to a dull black color. It matched what the thick cloud looked like when the Great Cloud Disaster first set off. However, this was now in liquid form, not solid.


Sparked with an idea, Mad Scientist set up some long clear tubes that would lead into a large bauble that was half full of a dark oily mixture of minerals he managed to collect from different parts of the Mine when nobody was looking.


As soon as the two mixtures met, nothing happened at first. Then, as if without warning again, an explosion occurs. It wasn’t a big one as the tubes were fine, but Mad Scientist sees through his Nerd Lens a strange, ghostly like presence slowly making its journey downward towards the bauble. It was barely noticeable, but it was there. Not only could he see it, but hear it as it let out a faint, inaudible whisper.


Once the ghostly streak dropped into the bauble of oily good, that faint whisper became a screeching noise so intense not only was it deafening, but glass shattering. It was enough to cause a spiders web crack formation on the Nerd Lens Mad Scientist was wearing. Luckily for him, he had a spare pair that was snugly wrapped in cloth and protected.


As soon as he switched Nerd Lenses, he watched with a smirk as the dust settled and before him were four snake-shaped entities, all ghost-like. Closing his eyes, Mad Scientist mouths the word “Home” and the entities responded by speeding into the pieces of broken glass that littered the secret lab’s floor before finally entering into the broken Nerd Lens Mad Scientist had set aside.


With each new piece of glass the ghostly snakes seemed to consume, they grew larger. The one of the four was much larger than the other three. It was also quiet while the other three made high-pitched ringing noises.


It didn’t take much time for Mad Scientist to understand what he created. Naming the largest of these four virtual snakes (the name he calls them) as Lason, he uses this entity as the main hub of communication between himself and the other three. Each of the smaller virtual snakes have since been assigned to their own district while Lason travels up and down The Pipe and does whatever Mad Scientist asks it to do.


The four virtual snakes communicate with each other and relay all information they find back to Mad Scientist, who then schemes up new ideas on how to deal with the nerds of Nerdosia.


At the moment, spying and mind control are among his top priorities to deal with a population that simply doesn’t understand his genius. 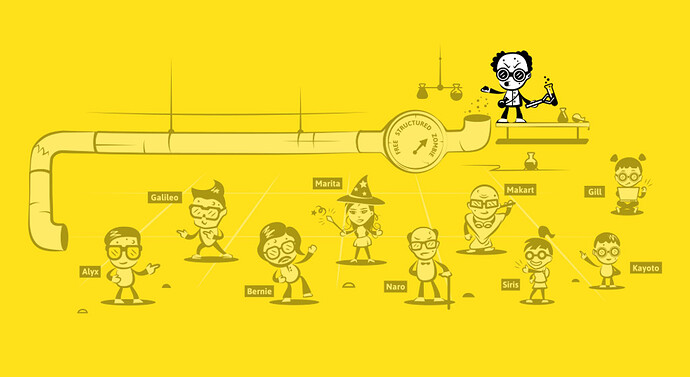