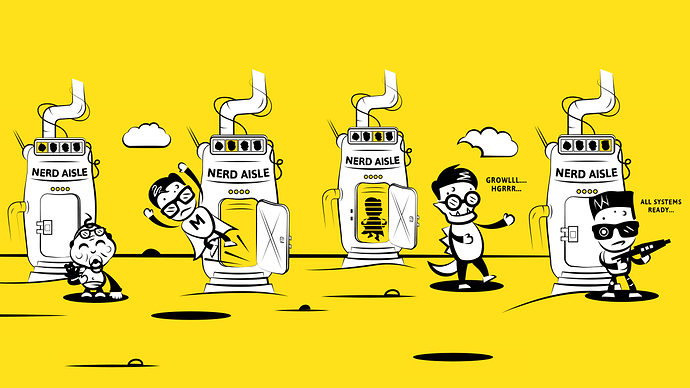 GG Academy was originally founded by the Ancient Nerdosians. However, at some point, it was briefly abandoned due to reasons only Chancellor Kayoto knows about and won’t share with anyone. Shortly after meeting Gill, he assigned her to not only take over GG Academy but full control of Nerd Aisle as well.


The Academy is attached to Kayoto’s University and Nerd Aisle’s location is actually situated between both facilities. However, it’s under full control of GG Academy now that Gill is the director of it.

This is an area belonging to the nerd known as Gill. She is responsible for the development of all Nerdosians. There is a machine she operates called the Nerd Aisle. This is where a nerd chooses a certain path to go through, agreeing to partake in a process known as the Transformation.


By Gill’s discretion, the Nerd Aisle carefully checks whether a nerd is eligible to transfer the chosen path to the next level. However, since the Great Cloud Disaster, the Nerd Aisle hasn’t been as stable as it used to be. Should a nerd enter Nerd Aisle unprepared, the likelihood to downgrade instead of upgrade increases.


GG’s Academy is also a place to improve some skills and practice personal path development with other Nerdosians. This serves as a great opportunity to partner up with like-minded nerds. Sometimes, two nerds working together for a common goal is better than going it alone!

Running GG Academy with Gill is her nerd greyhound, Thor. After Thor’s master went through the Nerd Aisle through dishonesty, his transformation proved to be such a severe setback that the fate of the nerd greyhound he brought with him was now in Gill’s hands. She took Thor in and now the two are inseparable.


Ever since that one nerd’s major setback, Gill vowed never again to allow nerds to enter the Nerd Aisle without complete certainty they’re ready for it. Interestingly enough, Thor can sense a lowly nerd when it encounters one. Since that fateful day, Thor will deliberately stand between Gill and the nerd she interviews, not moving until the interview is done.


If Thor approves of the nerd, he sits next to Gill as if without a care in the world. While Gill is capable of seeing through most nerds, the extra insurance from the nerd greyhound simply makes her job a bit easier.

Prior to the Great Cloud Disaster Mad Scientist caused, the Nerd Aisle was perfectly fine. However, after the fact, Nerd Aisle also experienced a series of unexpected issues where it too hasn’t been the same since. It didn’t help matters when at one point Mad Scientist broke into GG Academy, as well as Nerd Aisle, and took vials of liquid nanobytes and a number of other materials he deemed useful. He also tampered with Nerd Aisle, namely by stabbing a needle into its tubing to draw out samples of fluid he knows plays a contributing role in the transformation of each nerd.

When Gill and Kayoto learned Mad Scientist tampered with Nerd Aisle, they investigated to make sure it became safe again for nerds to use. Just to be sure, Kayoto ran a couple Nerd Lens devices through to see what would happen. Since the mass production of the Nerd Lens that went through the Nerd Aisle before Mad Scientist tampered with it, no additional newly constructed Nerd Lens devices had been put through.


The first Nerd Lens that was put through came out broken. Further maintenance checks and tweaks were made to Nerd Aisle before running through the second Nerd Lens. That one came out as it should. Just to be sure, another newly constructed Nerd Lens is put through and that too came out fine.