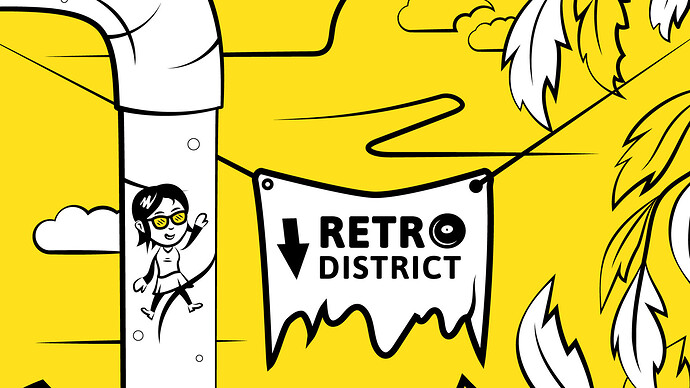 Hey, welcome to Retro District! I’m Bernie, a nerd referred to as mayor by the Nerdosians of Retro District. In all honesty, I don’t see myself as a mayor. I see myself as a nerd who cares enough to do what’s right for all Nerdosians and not just for my own district. I also believe in order for the future of all Nerdosians to be bright, we need to remember our past and not treat it like disposable garbage. Without remembering our heritage and where we really come from, we are nothing. No, wait, worse than nothing because we’d be setting ourselves up for extinction if we chose to forget the past, or worse yet, rewrite it.


Here at Retro District, we work hard to keep things real. To us, what’s real is the natural resources our beautiful world has given us, even after what the Great Cloud Disaster did to us. That disaster was caused by a brilliant scientist who lost his way, choosing only to see the world through his own set of eyes instead of how it’s supposed to be seen. We’re supposed to see the world through the eyes of the world itself, and I know the world, at least Nerdosian’s world, wants to stay as true to itself as possible. We can’t do that if tamper with it beyond recognition.


I was born as a historian first and I know it. Everybody here at Retro District feels the same way and it’s why we work hard to keep everything as natural as possible, at least in our own district. We do know nerds from the Physical District and Virtual District appreciate what we do as each of these two have, at the very least, a piece of Retro’s influence situated somewhere. It’s usually in their farms, gardens, and parks. Even when dolled up by physical doodads and virtual tech, there’s still hints of what was in there somewhere. For us, this is a good thing because it shows there are other nerds aside from just us that care. This means a lot.

The lifestyle of a nerd in the Retro District is as laid back and peaceful as it gets. Well, sorta peaceful as we have a thing for music. We love music because it brings out the spirit that exists in each of us that sum up who we are. Whether its good or bad is really up to the nerd to contend with. For the most part, I believe every nerd has goodness in them, including even Mad Scientist, the culprit that caused the Great Cloud Disaster.
Unlike Physical District and Virtual District that have giant cities and set points they call as homes, we prefer not to just stay in one place. Spiritually, Nerds are at their best when there’s freedom to move around and become as one with ourselves, and with our environment while we’re in it. Staying in once place introduces stagnation, which then feels like well water. There’s no freedom of movement to keep growing. So here at Retro District, growing is what we like to do best.


We grow everything we touch. Our vegetation is grown everywhere, separated by paths that are trekked either by foot or pedal-mobiles only. We also don’t have any real buildings set in anything other than collapsible tents, caravans, and wigwams. Actually, as the environment around us changes, we adapt to cater to it instead of forcing it to cater to us. We actually work with the natural wonders of our Retro District so that we’re living together as one and not as separate entities.


Interestingly enough, the environment at Retro District works with us, as if it knows what we need, including dwelling locations according to seasons. Yes, we have seasons that has the climate change often. When the temperatures get cooler and the vegetation goes into hibernation, that’s where we go. And no, we don’t get cold as the materials in the tents, caravans and wigwams produce enough natural heat to keep us warm.


In addition to loving to travel about as freely as we do, we love our music and we love our collectibles. If you expect peace and quiet, you will get it here as there’s no city buzz noise, but there’s a good bet, especially if you come to where I am, there will be music playing. And, if it’s not music you’re hearing, it’ll be the birds chirping, or the odd animal making a statement somewhere for some given reason. 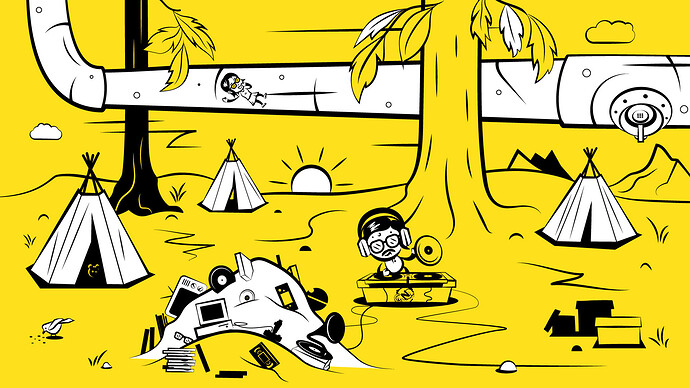 There are distinct rivers, lakes, and streams that are spread throughout Retro District. There are stones set in place, like bridges that allow nerds to cross from one piece of dry land to another, but in a manner that allows the water to keep flowing freely as we don’t like to tamper with nature. This is a lesson Nerdosians learned long ago, even long before Mad Scientist’s Great Cloud Disaster.


Aside from the waterways, there’s lots of trees, gardens, and small forests. We used to have a real big one, Nerdwood Forest, but it was levelled due to a strange disaster that had a connection to the Great Cloud Disaster. Nobody was seriously hurt, but what used to be trees there is now just a giant tree stumps and dirt. We’ve since used it as a gathering place as those stumps make handy seats for us to sit and gather and discuss important matters regarding the Retro District.

One thing we don’t tolerate in Retro District is violence. We’re Nerds, we love. There’s no room for hate here. Even if you try to hide the hate and anger, good luck with that because the animals here pick it up and believe it or not, let us know. This is their district, too. In other words, love and respect is the only real rule that exists here at Retro District. When you have that, you’re good and we’re good.