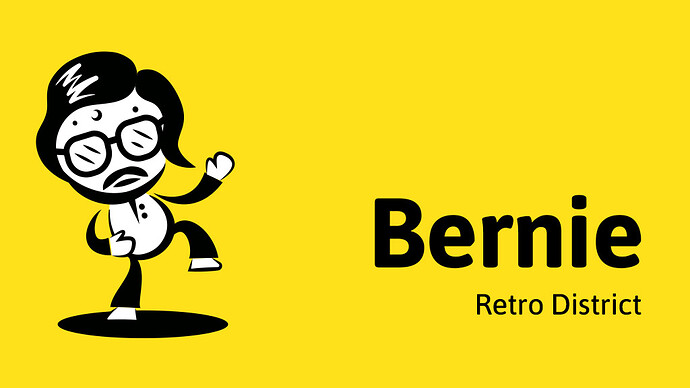 Bernie earliest memory of his childhood was waking up one morning to learn his parents were gone and he had just become an orphan. To this day, there is nothing for Bernie to go on to find out what happened to them. They simply vanished, leaving him to fend for himself while still just a baby nerd.


Family friends and neighbours were first concerned about Bernie, but soon learned he would be just fine when they saw how quickly he adapted to life as a full independent at such a young age. One of the first hobbies they notice him getting into was collecting anything and everything he deemed of value, which was usually something musical or playable. He especially had a fondness towards animals, recognizing them as highly spiritual creatures he felt all nerds should learn from. When he was still just a small nerd, he learned of a litter of Nerd Greathounds and wanted to take a pup for himself. Upon seeing the litter, he observed the smallest among them was quite the little scrapper and surprisingly intelligent. There was no second-guessing when he chose the all black pup, took him home and named him Zeus. When asked why he picked such a name, Bernie simply answers with a laugh Bless you! as if he thinks whoever asked the question just sneezed. To this day, he still won’t give a straight answer why he named his dog the way he did. Bernie is bound to burst in a silly song, which has since prompted nerds to stop asking.

Now a grown nerd, Bernie’s independent upbringing has made him surprisingly gregarious. Instead of being a longer, he is always with a group of people. When the great white blast in the Nerdwood Forest levelled the trees down to their stumps, he was playing with some of his friends and his dog in an old fashioned game called tag. Luckily nobody was hurt, but Zeus did exhibit a strange yellow glow from his body. It only lasted for a moment, but Bernie did take notice of it, as did a few other nerds.


One thing the nerds of the Retro District know best about Bernie is how calm he usually is whenever facing adversity. Instead of screaming in panic, he either whistle or sing some kind of melodic tune.


However, they also know not to mistake him for a pushover either. While growing up and becoming a favored student at the University, any nerd attempting to bully Bernie would be in for a surprise he make sure they wouldn’t forget. On every occasion he be bullied, instead of crying like most baby nerds do, he turn the tides and act all giddy in what some would describe as someone of a split personalty.


Even among some of the bullies who later become good friends with Bernie, learned the flip-flop between a passionate drama queen to a giddy lunatic that excelled at making funny baby noises was the nerd way to put an end to getting picked on without resorting to violence. As for some of the bullies and strangers who cant figure out what makes Bernie tick, they regard him as an eccentric that is best left alone to do whatever he wants.

Because Bernie loves to collect items of interest, he has made a career out of it. His most prized collection are his complete comic book series of Captain Nerdle. When Bernie was orphaned, reading the adventures of his singing hero was inspirational, which caused Bernie to act the same way. Not only does he like to collect what he deems valuable for himself, but for other nerds as well. Throughout the Retro District, its become common knowledge if a nerd is missing anything to complete their own collection of whatever, Bernie is the one that can help them find it. But, dont expect he will always do this for free. If theres something missing from his own set of collections and you happen to be the one that has it, he will do business with you for as long as you are willing to do business with him.


Among his favorite items to collect are antiques and figurines, especially those that have what Bernie describes has a spiritual glow to them. Of the antiques and figurines he has, its mostly old-style black music discs that play on a really old box designed to play them. But, he wont simply collect all of them. If Bernie cant feel a connection to a song coming from the music disc, he will have no part of it.


As a collector, primarily of antiques and figurines, he owns his own gallery to have everything he has on display. He also encourages other collectors, especially those who have worked with him to do the same. Bernie is big on what he calls collecting and protecting history with soul.

Because Bernie is so liked by the nerds of the Retro District, they gathered together and asked he lead them as mayor. At first, Bernie refused as he admits he hates politics. However, he changed his mind once his friend from the Virtual District, Galileo, made a convincing argument. When Galileo and Bernie attended University at the same time, Galileo watched one bully who tried to target Bernie end up handing over his own lunch to him instead of trying to take away his and walked away laughing. That very day Galileo learned Bernie sang a joke to the bully only he would understand. Upon the next day, that bully befriended both Bernie and Galileo and became a defender of the bullied from those who used to be just like him.


Galileo pointed out to Bernie it’s because he’s so good at putting bullies in their place without resorting to violence that he would make a good negotiator in politics to keep nerds with opposing opinions from taking matters too far. He also knows Bernie is an extrovert, which means he cares enough about nerds to do right by them.

Since the cloud disaster incident, nerds from the Retro District haven’t forgotten that there was a minute long disruption in every energy source gadget before the explosive impact that rendered the Nerdosians population visually impaired. That, plus the headaches that came with it, is something one never forgets!


Bernie remembers the incident a bit too well. While listening to an old collection of retro era music and viewing an old comic strip at the same time, his hero, Captain Nerdle, had just mocked a quote “darkness looms” before the cloud explosion actually went off.


Bernie, remaining oddly calm despite what happened, simply kept listening to his music while everyone else around him scrambled in a panic. He had no choice but to stay calm because the intense headache that hit him, plus the blindness, rendered him momentarily mobile.


When he was able to move, the first thing he did was set aside his earbuds and nerd pad. Then, from there, he simply sat and listened. For obvious reasons, seeing was out of the question, but Bernie also comes from a long line of nerds who believe what the eyes see isn’t always the same as what reality presents.


Actually, many within the Retro District share this line of thinking. Instead of relying on mere physical presentation of anything, they opt to go beyond the surface. One of the biggest reasons why the Retro District got it’s name is because of their fascination with history.


For as long as Bernie can remember, anything and everything that had a physical property to it has history. Instead of focusing on what is, he’s always been more interested in what was. And, unlike those from the Virtual District, instead of venturing in what could be, Bernie would look more into merging what was, is and will be as one entity. For him, it’s like a woven loop.


This line of thinking, for Bernie, has made him one of the most sought after historian of artisan nerd culture. Collecting anything and everything he deems is a spiritual link between what was, is, and will be is a passion for him!


With that being said, Bernie, as he’s enjoying an old vinyl track of vintage Nerdosian music, also makes a point to watch on his nerd pad the latest edition to the Nerd News Network. His friend from the Physical District, Alyx, is to be interviewed by the networks reporter, Enaid.


Meeting Alyx on The Pipe en route to Amusement Park, Bernie learned of Alyx being a stockbroker and instantly asked for a collection of old trade slips that used to get passed between brokers while on the trade floor.


As odd of a request as that seemed to be for Alyx, he obliged Bernie with scores of old trade slips. There were even a few that dated as far back as the Great Crash where it’s impact upon the entire nerd population was just as profound as the cloud disaster incident.


When Bernie received the old trade slips, he scanned each of them with his nerd pad as a means of preservation. Retro or not, Bernie likes to make sure everything he collects is inventoried. He does this for peace of mind, just in case something happens.


For Bernie, meeting Alyx was pretty cool. Not only did Alyx give him old trade tickets, but digital markers for each one. Bernie learned that Alyx liked to make extra security protocols to protect anything he deemed of value. Learning this trick from Alyx, Bernie has since applied digital markers with his Captain Nerdle comic books, as well as downloading his full roster of retro music from old black disks that used to be played long before modern technology took over the audio-scape. 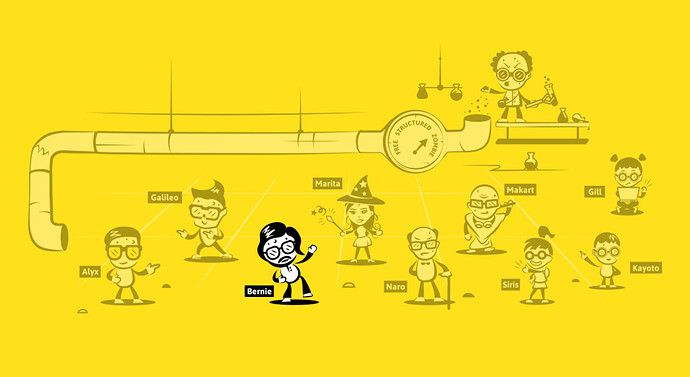