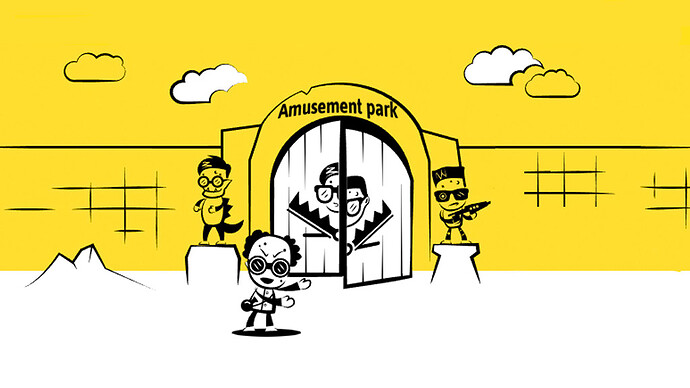 Located within the common area of Nerdosia, Amusement Park is the go to place for nerds to simply take a breather and enjoy themselves. For nerds coming from Physical District, there are a number of activities specialized to cater to their interests such as digital arcade games and digital trivia games. For nerds from the Retro District, old-fashioned runway games and rides set off a variety of themes such as Captain Nerdle’s Pirate Adventures and Nerdectric Avenue. As for nerds of the Virtual District, the upgraded versions of augmented reality and virtuality games are too addictive for words, especially the biggest ride attraction Amusement Park ride has, Nerd Rider.

Visitors from the Retro District are most familiar with Captain Nerdle and the crazy adventures he’d take the Nerd Anne’s Revenge. This theme park within Adventure Park was designed by the direct influence of Bernie, the current mayor of the Retro District. While this theme area is as “retro” as it gets, there is also a heavy amount of digital artwork and virtual technology that’s been embedded into what makes this part of Amusement Park one of the biggest attractions it has.


For nerds who think they can handle the craziest rides, the replica of Nerd Anne’s Revenge is a giant ship that sways back and forth like a see-saw, but rocks side to side, as if it’s caught up in some waves. In addition to this ride, there’s simulated treasure hunts and theatre acts also to be found.

Neon lights are everywhere, which the Nerd Lens picks up really well. Throughout this themed area, it’s a continual flow of retro style, electric music that will put each nerd in the area into a mood that fits the groove. The rides rock and roll around according to the beat of whatever music is playing, which is usually fast-paced.

Amusement Park’s big roller coaster ride is Nerd Rider. The size of this ride is massive and geniously designed where it will meet every single major attraction there is in the park. The first drop once at the top of its climb feels like you’re plunging into the mouth of the Great Kraken from the Captain Nerdle’s Pirate Adventures as it springs out from the virtual sea waves that looks like it’s rocking Nerd Anne’s Revenge. The barrel looping of this ride makes the scenery within Nerdectric Avenue become a blinding blur of colour. There is a well-balanced mix of retro, digital, and virtual technology that makes up Nerd Rider that even Mad Scientist seems to love it.

No amusement park is complete without games. At Amusement Park, there are plenty of those.If you like games with higher stakes, the casino-style games such as Nerd’s Wheel, Nerdjack, and Nerdosian Roulette. Maybe you’ll win big, maybe not.