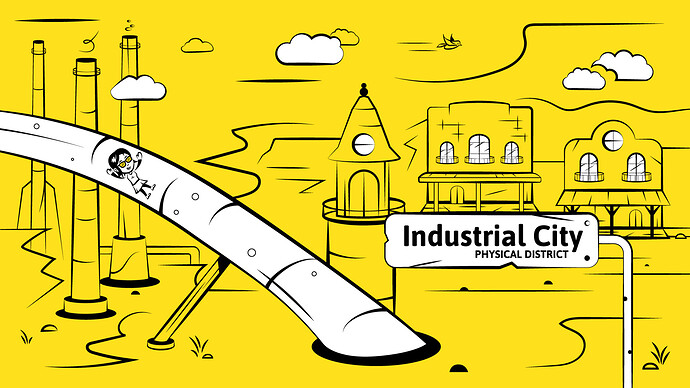 So, you’ve heard about Physical District and want to know more about it, right? Hey, I’m Mayor Alyx and I’m the nerd who knows everything there needs to know about Physical District, as well as its capital, Industrial City. Actually, it’s the only city, which acts as a central hub to surrounding sectors that have each been designed to serve a purpose.


For starters, the northeast part of Industrial City is where all our mechanical technicians live and work. All those funky gadgets we hold in our hands, including the physical compounds that make the Nerd Lens, comes from the talent pool we like to call Mech Nerds. What’s cool about them is they don’t leave any waste behind whenever doing their stuff. Extra parts or whatever is either turned into toys for baby nerds, or decorative items that we don’t really need, but like to have anyway.


The northwest part of Industrial City serves as the home and work base for whom we fondly call Wire Nerds. That community works with circuitry that seems to bring mundane objects to life. Whether its something digital or electronic, these are the nerds you call to make things happen. If you want your Captain Nerdle action figures made by the Mech Nerds to walk and talk, the Wire Nerds will make it happen.


Industrial City’s southeast corner are what we call Funky Nerds. We don’t really know what else to call them because they’re in a world of their own that seems kinda confusing. Sometimes we think they’re really Retro Nerds in denial, but they’re a really cool bunch if you ask me. The southeast is the noisiest part of Industrial City as there’s always a party going on somewhere over there, usually more than one. If you’re into digital, funky, electro-style music and art and whatever, that’s the place to go. Usually we see our Mech Nerds and Wire Nerds flock to the southeast just to let loose. I guess it’s sort of like Physical District’s version of Amusement Park, but without the big rides and games.


The wild southwest of Industrial City are also an odd bunch, but that’s for good reason. My family lives there and, well, they’re a special breed of nerds. It’s our most fortified part of Industrial City because that’s where all the nerds who are caught for wrongdoing go. It’s fortified for their protection, as well as yours. The nickname they’ve been given are Red Nerds as each have a red alert anklet strapped to them to monitor wherever they go. These are also the nerds that handle all the waste management concerns of Physical District. Don’t get me wrong, though! It’s not like it’s a dirty job as there are a considerable amount of health and safety protocols that take place for their protection, but they’re jobs that need to be done by somebody while everybody else practices whatever trade they specialize in. It is also a highly spiritual district as we even have nerds who’ve purposely chosen to live and work there as atmospheric specialists, environmental engineers, farmers and gardners, as well as machinists. We’ve even had some reformed nerds who are free to come and go anywhere they choose, but rather enjoy what is kind of another retro-style place to be.

The core of Industrial City is where everything is of concern to Physical District resides as the main headquarters for each corner of our city. It’s also where most of the action is as this is where all financial concerns take place. It’s also home to Casino, the central hub of fun and games where all Physical District citizens, except for the Reds. Because the Reds are undergoing a rehabilitation program, exposing them to catalysts that can thwart them back into unhealthy behavior will cause an undoing we don’t want to see happen to any nerd, no matter who they are. It wasn’t easy for me to turn in my own family because I love them. But, you know what? I love Nerdosia more, and that’s why I choose to stay as close to my fellow nerds as possible. I work as a stockbroker, yes, but since becoming mayor I have focused on investing more on making Physical District the best possible place to be for my fellow Nerdosians. 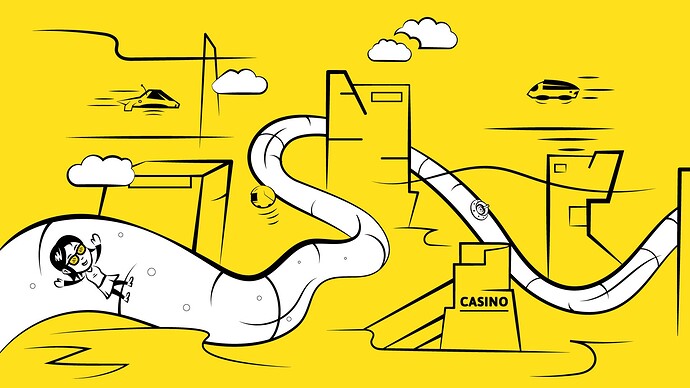 The Casino is now connected with the one set up at Virtual District and is especially fun at the tables that needs at least two or more players to participate. Ever since the Great Cloud Disaster and the development of the Nerd Lens, even nerds in the Physical District can face off in friendly casino-style games against Virtual District players while at Casino. How it works is we pit a table of Physical District nerds playing a specific game against a virtual table of Virtual District players and use the Nerd Lens device at secured locations within Casino to do it. This can only be done at Casino. It can’t be done anywhere else. Have you ever played Virtual Nerdjack before? It’s not what you think! Nerdjack is a game where nerds from the Physical District hold five cards, as do the nerds from the Virtual District. From your end, you keep the two cards from your five that come closest to twenty-one and get rid of the other three. From the other end, the opponent does the same. If you feel your two cards has a total that’s too low, you can steal one of the three cards the opponent has set aside in the discard pile. You’re taking a chance the card you grab isn’t too high that will cause you to go over twenty-one, but also hoping you can inch your way closer to that ideal number. Your opponent will have the option to do the same with you. From there, it’s between you and your opponent to either raise the stakes or make the call in hope you have the winning hand. If you do, you take all the credit. If you don’t, your opponent takes it all. Should there be a tie, the prize is split in half between the two players. It’s a cool game, one I play often when I’m in Casino.

Nerdosia Trust is the official banking system of Physical District that handles all financial concerns of Nerdosians. This is where Nerdians go for safekeeping. There are no banking fees involved as we know those funds don’t belong to us. We’re trusted to keep your finances safe and don’t feel we should be charging you for that. However, if you choose to invest into Nerdosian-related businesses through the stock exchange program, this is where those Nerdians will see buyer and seller fees get involved as the stockbrokers, like myself, are paid to make your investment work for you. If there’s a win, they’re paid a commission. If there’s no win, they aren’t paid at all and your initial investment remains at par. This means you lose nothing.

As already mentioned, Industrial City has four cornered sections and a downtown core. There is also what we call the outskirts, which is the territory that surrounds Industrial City, leading to the borders of Physical District. There’s hydroponic farms that are laid out in these areas that are accessed by a rail system that’s similar to the Pipe, but uses the mix of digital and mechanical technology to do it. The Pipe is a mix of Physical and Virtual tech, which moves much faster than what we use in Physical District.


Physical District is like a bridge between the nerds of Retro District who prefer slower lifestyles and the nerds of Virtual District who can’t seem to get enough of futuristic-style living that’s always pushing the physical boundaries into either augmented or virtual territory. Here at Physical District, we do a bit of both, but prefer to keep our feet on the ground and tangible goods in our hands as if it serves as a reminder that we are living, breathing souls that make Nerdosia as great as it is.