Why Batman is different from other heroes?

Raised by Nerdosians community Nerds about everything
Bernie_on_Nerdosia October 20, 2022, 12:35pm #1 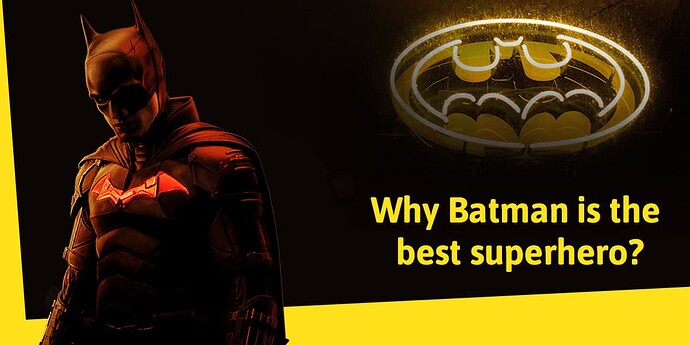 When DC Comics took it upon themselves to create Batman as a main protagonist in the twenty seventh
issue of Detective Comics in 1939, little did the creators Bob Kane and Bill Finger realize they had the
makings of an icon on their hands.

Starting in April 1940, Batman was given a sidekick, Robin the Boy Wonder, and the two have been a big
part of comic book culture since then. Over time, what started out as a quarterly publication became
bimonthly through the late 1950s, then later to become and remain as monthly editions.
Since then, there have been three notable relaunches of the Batman series that each had new timelines
and storylines. The New 52 started the first reboot, ending the original Batman series with a relaunch
of a new first issue.

In 2016, DC Comics brought forth DC Rebirth that chose to pick up where The New 52’s version of
Batman left off. Batman, Volume 3 was launched as a #1 issue in August 2016 and was a twice-monthly
publication relaunch of this comic book series. Infinite Frontier was the third relaunch of the Batman series in March 2021 when it began with issue #106 of the Batman title.

The Man Behind Batman

As the brooding Bruce Wayne, a multi-millionaire philantropist, the man behind the Batman persona also
came across as a womanizing playboy. In the original storyline, Bruce Wayne opted to come across as
the least likely person to have anything to do with the Batman as Gotham City’s law enforcement
agencies were determined to figure out who is the man behind the vigilante sporting the bat-like
costume.

The appeal behind Bruce Wayne as a person revolved around the tragic loss of his parents when they
were robbed and murdered before his eyes by a culprit that was never caught for this horrific crime.
Determined to honor the death of his parents and to seek justice for Gotham City, the orphaned young
man sought all the training and skills he felt he needed in order to become the ultimate crime fighting
machine.

Brought up by the loyal butler, Alfred Pennyworth, Wayne looked to him as more than just a servant to
the Waynes. In many ways, Alfred became a second father to a man who would put the money of his
family’s mass fortune to good use. Not only did he use this to continue the family legacy of sound
business management, but help out various charities in need, as well as pay for all the training and tools
he needed in order to become the Batman.

Even as the relaunches of Batman has taken place, the loss of Thomas and Martha Wayne as Bruce’s
murdered parents remained the same. However, both the movies and comic-related reinventions
about the criminal involved has changed from time to time. This was done as an attempt to add even
more drama to the Batman storyline, plus give an opportunity to have a sense of closure once this
mystery was finally solved.

In reality, the best storyline of the bunch was having the mystery behind the death of Bruce’s parents
remain unresolved. It played a huge role in what drove the man to become Batman and why he was so
dedicated to Dick Ward, the boy whom he adopted after he lost his parents. With this storyline, he saw
himself in Ward, which served as his inspiration to train him as his trusty sidekick, Robin.

As Dick Ward, he was a member to Bruce Wayne’s family that partially filled a void his parents left
behind when they died. As Robin, he was a trusted partner that made Batman a less lonely hero of
Gotham City.

When Bruce Wayne donned the costume of a man-sized bat, the idea was to use a creature already
feared and loathed by mankind. Among the innocent, they wouldn’t give Batman much regard other
than seeing a grown man run around in a bat-like costume but at the same time keep their distance. It
is natural human instinct to fear the unknown and with Batman, there was a series of unknowns that
gave him the ominous presence he had.

It is also human nature for the guilty to fear something that takes them off guard. As a vigilante
determined to rid the cancer known as crime, Batman excelled at this. The costume alone gave him a
psychological advantage over the common criminal, making it easier to beat each one into submission
and leave them behind for local law enforcement to pick up.

The appeal behind Batman was he didn’t share the typical qualities found in most other superheroes.
He didn’t come from another planet nor did he possess any special abilities that made him anything
other than a mere human being. What made Batman extraordinary was his ability to use a variety of
sciences as a means to solve mysteries. He used the science of psychology, the science behind the
technological gadgets he used, as well as the science of trained combat in order to subdue the enemy.
Even as Bruce Wayne, the family fortune was poured into scientific development. Each time Wayne
Enterprises or Wayne Tech came up with something new, not only did it serve as a benefit to the people
of Gotham City but to Batman’s crime fighting arsenal as well.

The method behind Batman’s madness as a vigilante hero was brilliantly analyzed by his longtime
nemesis, The Joker. In a special publication known as The Killing Joke that was published in 1988, this
was the closest tale to what caused this crazy clown to become the murderous monster he is. In many
ways, The Killing Joke served as the spawning point for the different relaunches of the Batman series that
saw altered timelines and storylines that still don’t sit very well with loyalists who still prefer the original.

In The Killing Joke, the story starts out when this disfigured clown invades the home of Gotham City’s
Commissioner James Gordon and shoots his daughter, Barbara. To make matters worse, he takes a
series of graphic photographs before knocking out and kidnapping the distraught commissioner.
When Batman learns of what happened, he is bent on doing more than just taking The Joker back to
Arkham Asylum for the criminally insane. However, after meeting with James Gordon, he is told to put
an end to this madness by the book. Gordon was determined to prove to The Joker that not even
taking away his daughter’s ability to walk anymore was enough to make his mind snap.

In The Killing Joke, readers witnessed a tale of a struggling man whose wife was pregnant. In an
attempt to get back at the factory he used to work at, he teamed up with a pair of lawless men to rob it,
hoping he could use the money to bring his new family out of poverty. However, before going through
with this particular crime, the man is informed a freak accident killed his wife and unborn child. Feeling
broken, he has second thoughts about breaking into the factory with his partners in crime but they
convince him otherwise.

What should have been an easy enough heist quickly became a scene of chaos as the Batman thwarted
the efforts of these criminals. It would be during this occasion the widowed man fell into a bin of
chemicals while his cohorts were killed by the law enforcement that was at the scene. The widower
survived his fall but the chemicals left him disfigured, forever altering the facial pigment of his skin to a
frosty white.

Between the loss of his family, as well as a heist gone wrong, and now disfigurement, the man’s mind
snapped, thus becoming The Joker. Whatever life he had before this moment was now gone, as well as
any regard he’s had for anyone’s existence since then. When the Batman finally caught up with him
and the two exchange words, The Joker’s analysis of Batman’s own brand of madness served as a work of
genius that best described the vigilante, as well as the man behind the mask.